BUY it on amazon, here. 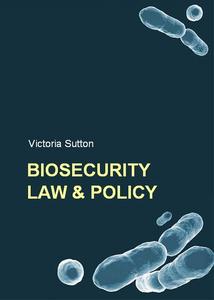 Biosecurity Law and Policy is a comprehensive examination of laws, regulations and policies which  regulate intentional and unintentional acts that use biological agents and components which may result in small to catastrophic harms to society. The book begins with the foundations in law which shape biosecurity law and how the history of bioterrorism influenced the development of law and policy. Governance structures, organizations and the laws and regulations which they implement establish the framework for the analysis of cases and statutes which have rapidly developed in the post-Amerithrax events of 2001.  Constitutional issues regarding individual rights, national powers, state sovereignty, national biosecurity, emergencies and preparedness are examined. Vaccines and countermeasures are examined in the context of intellectual property, food and drug law, human subject research, informed consent and animal experimentation. The roles of state and federal governments in biodefense and public health emergencies are considered in the context of constitutional federalism, constitutionally based rights and responsibilities, state powers, property rights and potential liabilities for many aspects of biosecurity and biosafety threats and emerging infectious diseases.  The regulation of laboratory biosafety and biosecurity, federal criminal statutes, military law issues, private causes of action, and comparative international law are subjects of separate chapters.  The book concludes with a look at the future of law and regulation in biosecurity.

Victoria Sutton, MPA, PhD, JD is the Paul Whitfield Horn Professor at Texas Tech University School of Law and Director of the Center for Biodefense, Law and Public Policy.Type your paragraph here.